Peter Williamson is a professional golfer turned social entrepreneur who sees physical games as a way to catalyze conversations and problem-solving. Based in Washington DC, Peter started a creative agency in 2018 called Game Genius, which focuses on supporting the local region through non-digital play. The company designs custom games, workshops, and public events to help people enjoy what they do while building community awareness. To date, Game Genius has served over 100 organizations and designed 2 city-wide treasure hunts, with game projects addressing topics like toxic partisanship, mental health, environmental behavior change, financial literacy, and creative philanthropy.

During the interview, Peter had several staring contests with Mocha (below) to keep this cat under control, so his challenge was twofold! 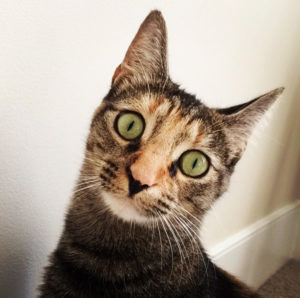 Peter has the chance of taking on different roles given his backgrounds and he’s doing many things in the city and he has all sorts of networks to help him and the community through engagement.

He has found a lot of wonderful challenges through failure, so he really enjoys this in a certain way. His favorite fail has everything to do with ambitious goals and perhaps with always saying yes, so he might try to carry too much. This project had a treasure hunt for a friend in a city that is not his own and the fact that some of the clues he used did not belong to monuments that were still around given some construction projects in the sites! So he learned to go further into the research, be more precautious about overextending yourself and working smarter not harder.

One of his proud successes is a project related to communication: Consensus. It has been used successfully in many different settings, from families to foundations, social organizations and businesses. Anything where you want to have a productive conversation. It was created during the 2016 elections and helps understand why people tend to polarize around discussions while using a mix of competition and collaboration to bring people together.

Peter’s taken a lot from what he learned from both golf and game-design, so it’s for him really important to quickly iterate. For him, it is about thinking about a concept of a game related to some topic you want to get into and then go back and forth with iterations and playtesting. A recommendation would be to play different games and gather inspiration from them, to constantly play as much as possible and think about why do you or others like this and not that about those games.

A best practice for him would be to have a diverse group of playtesters to have as many perspectives as possible. It is always a great ego check. Also consider the audience that this goes for because the audience is not always completely wide-open!

Peter would love to listen to Vincent Siu of Press Start Hong Kong, since in a way they are quite similar but also of course very different being from such different parts of the world. The book he would recommend is outside of the typical (even though he is not an avid reader) and he would say Ella Minnow Pea. The book is, in a way, gamified! His superpower would be to see everything as a game.

Picking one game as a favorite is, as usual, really hard. However, he mentions Dudo the dice game! I have never played it but seems enticing, even further because he mentions that it is played in one of the Pirates of the Caribbean movies.

We had a chance this time to go for the random question this time, by Antonina Zuzanna. It has to do with the pricing of projects in front of clients. Definitely click play for the gold that is waiting for you on this one!

His final advice is to think a lot about the audience and not be afraid to innovate. We can find out more about Peter through the Game Genius LLC website gamegenius.org and as @GameGeniusLLC on “all social media”!

Peter also wants to play a quick game so he asks: what string of 5 consecutive English letters were said during this interview? The answer in ALL CAPS will earn you a 10% discount in the Game Genius store.

During this episode I mention the Remote Adventures I’ll be hosting with Dustin Staats on Wednesday, March 25 at 7 pm CET (Madrid time), so be sure to register through this link!